I first heard of Edward Abbey when reading Belden Lane’s, The Solace of Fierce Landscapes. When I did a quick google search I was interested in his reputation as a sort of fierce individual, who is is linked to an approach to environmentalism that is often visceral, but supported by intellect. I selected Desert Solitaire because it was one of his non-fiction books, and because he writes about his experience as park ranger at Arches National Monument in Utah. I had no idea if this book was going to be worth my pulling it off the highest shelf in the Belles Letres section of the only used bookstore in town, but I wanted more of landscapes and wilderness, solitude and thought, and life outside the everyday illusion of things. I purchased it despite the annoying blurb, on the back cover, from The New York Times Book Review that likened the book to “a ride on a bucking bronco… rough, tough, combative.” Who knows what the reviewer was thinking, but it certainly did not fit — after reading Abbey’s book — the essence of the book or Abbey’s thought.

I was thankful for Abbey’s complete and utter honesty about the wilderness and about life. He warns the reader not to go running out to the Arches to find what he found — a warning I took seriously since I’m almost always ready to run.  But, more than just an elusion to the uniqueness of every human, obviously the reader is not Abbey, his advisory gets at something critical: the massive change to the wilderness (of Arches and other places).  His warning was to his contemporaries in 1968. In a short span of time, approximately three years, the Arches, for Abbey, had changed. Over forty years later I imagine the Arches would be unrecognizable, although, I confess I have not done a search to find out anything more about them.  I think, in part, I am too afraid to face how quickly we can destroy the wild with our giant machines that can now take down a tree in minutes; how we can scrape away every living thing from the soil in days, and walk away without thinking about the cruelty of our actions and our ever increasing desire to devour nature, our own sustenance. Can we possibly be out of touch with reality? A society bordering on insanity?

I immediately connected with Abbey and his enthusiasm for getting the chance to do nothing:

“Those were all good times, especially the first two seasons when the tourist business was poor and the time passed extremely slowly, as time should pass, with the days lingering and long, spacious and free as the summers of childhood” (xii).

I do not know whether Abbey ever studied Buddhism, but certainly his thoughts come close to core ideas of Buddhist thought. More than affixing Abbey with a certain label, though, I was drawn to his piercing understanding of a childhood summer. I often tell my own children that some of my most vivid memories are of endless and dull summers when I was a child.  My siblings and I would sit in the living room of our raised ranch doing absolutely nothing. Amazing! I have intense and meaningful memories of doing nothing.  In our modern world we are in danger of taking the most precious gift away from our children: learning the art of doing nothing. Or, perhaps it is best said:  the art of being.

After reading the introduction I was hooked and wanted to read and linger with Abbey. I was truly only upset with him once during my whole time reading when he went on for a few pages about some made up story that seemed ridiculous to include, and had me thinking he was a misogynist. I managed to get through the story without throwing the book against the wall and giving-up on Abbey. It was worth it.

Abbey beautifully describes the wilderness of the desert. His walks, hikes, work, and entrance into the wild, either by himself or with a friend, not only create an image of Abbey as unafraid of a path without blue or red blazes marked for him, but as a trusting soul who respects life. He embraces it all, and much like Belden Lane he seeks not so much to make it all seem good, but rather to acknowledge life and death, to talk about it, give his opinion, and as a result to move onward with a love and reverence for it. 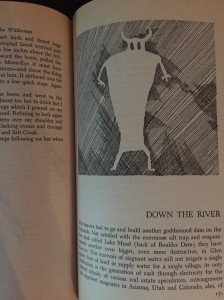 Perhaps, there are those who do not like what Abbey has to say, or the way in which he speaks of the tourist industry; or of the uncontrollable desire by man to rearrange nature, but Abbey in many ways is like a prophet — not a label he would like, nor probably would most religions like that I’m using it for him — but he tells or foretells of a world that is overly infatuated with modernization and technology, and of humans eager to take and destroy natural habitats without thinking of the consequences. He basically tells the story of civilization’s evolving organizational skills and devolving judgment and feeling. So, it might sound “rough” or rebellious to say:

In any case, when a man must be afraid to drink freely from his country’s rivers and streams that country is no longer fit to live in.” (162)

But, why would anyone think it is okay to pollute the hell out of a river so that it becomes completely and irrevocably toxic to all living things? Abbey was on the Colorado river with his friend Ralph Newcomb when he made this statement.  He acknowledges that it is probably the last time he will see such wild beauty. Not because he is dying.  Forty years later, it has become rather commonplace to pollute the Colorado river. Bad judgment is the result of an over emphasis on efficiency, I suspect.

Abbey speaks out against the growth of cities, development and a tourist economy that panders to lazy people who are looking for an experience in the wild that is safe — as easy as pushing the buttons on the remote control from your couch. For many his words do not simply encourage but ignite.  I would have to read some of his other books to find out if he is truly an instigator. Desert Solitaire, though, is, at least for me, a realization of a basic truth. As Abbey writes:

“No, wilderness is not a luxury but a necessity of the human spirit, and as vital to our lives as water and good bread. A civilization which destroys what little remains of the wild, the spare, the original, is cutting itself off from its origins and betraying the principle of civilization itself.”  (169)

As I examine my own life, I believe I have ignored what is wild in the world and within myself. A legacy of ignorance is not something I would like to give to my children. I am grateful Abbey took the time to write Desert Solitaire, and happy that I stretched out my arm to get it from the top shelf of the best used bookstore in my city.