I pray for wisdom. But most of the time I’m not sure what exactly my petition means to me. How will wisdom help? I used to think that wisdom was a way to make better choices, and perhaps it is, in a sense. However, I was being a bit deceitful in my wish for greater wisdom; I see it now as a rather clever attempt to get what I desired through making better choices. Clearly, my intent was fueled by a wish to have more of the good things in life than the bad.  Only, my scope was limited to my physical senses, and therefore I was limiting Wisdom to my small self. Whether I was trying to pray or meditate it seemed what I was really trying to do was stack the cards in my favor. Reduce the stress. Have more of what is good. Feel good, essentially.

I suppose all forms of religion can be used superficially. I do not believe the Catholic religion is the only tradition out there that can be used as a manipulative device rather than a sincere path.  As I swung on the vines, back and forth from Christianity (as a Catholic), and Buddhism (as a disillusioned Catholic), I thought a little about learning Centering Prayer, I read Thomas Merton; and then on the other side I read Jack Kornfield and Thich Nhat Hanh, Chogyam Trungpa and began to meditate. I listened to Gregorian Chants and also tried to remember some Buddhist mantras. All in a very tentative search for Wisdom.

Recently, I decided it was time to deepen my practice by making a serious commitment to Christianity. I lost some friends when I went back to church. And then I became a little (maybe a lot), disenchanted with some church people who used the term “unchurched.” 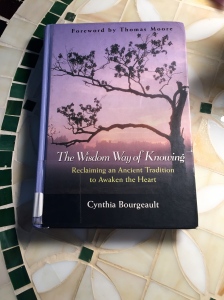 perfect moment, it seems. I’m sure I saw her name many times, but somehow or another I was too busy swinging back and forth to stop at either side long enough to ingest much. “Spiritual Materialism” is what Chogyam Trungpa called it. In fact, I even read his book, Cutting Through Spiritual Materialism!  And still, I was doing spiritual materialism.

In her book she cuts right through to the heart of Wisdom, and reveals the secrets of the ancients, how did they open their hearts to Wisdom? She explains what exactly the desert Fathers and Mothers were doing and why.

Oddly, this book is a rather practical guide to opening your heart. The secret is not at all as dark and mysterious as one might imagine. The difficulty is not exactly what you need to do and how you might go about doing it, but rather keeping dedicated to the path. The path requires your time and energy.  You must follow the path, which is mostly taken from the Benedictine monks. So there is quite a specific injunction here (Ken Wilber speaks to the act of meditation as scientific, so long as you follow the injunction: meditate and eventually, satori), you must work at it. The same is true if you want to open to Wisdom.

“Wisdom is a way of knowing that goes beyond one’s mind, one’s rational understanding, and embraces the whole of a person: mind, heart, and body” (p.27).

Putting mind, heart, and body into balance, according to the ancient tradition is, three-centered knowing, which will, we hope, keep us from falling asleep. Cynthia explains, falling asleep is what is referred to when you only use one of the centers: intellectual, emotional and movement (corresponding to mind, heart and body).

Keeping awake was something I thought only Buddhists were practicing. Then, while reading Matthew’s Gospel I realized the word awake had a dimension to it that meant more than getting out of bed and staying up at night. Before Jesus’ arrest, he asks Peter and Zebedee’s sons to stay awake with him in the Garden at Gethsemani. He prays asking God to let the cup pass by him. But he is willing to “let it be” and do as God wills.  When he returns to his disciples they are asleep. “So you could not stay awake with me for even an hour?” (26:36-40).  The disciples were not able to stay awake with Jesus, not because they were tired, but rather they could not be present with him.

“Presence is the straight and narrow gate through which one passes to Wisdom,” writes Cynthia (p.37).

Presence, if I understand this book correctly, is something that can only come through when there is balance of mind, heart and body. It does not matter what religion, or almost religion, in which you are participating. To create a balance you need to practice, and you must practice with all three centers.

“You will find the ‘practice’ part of the Wisdom tradition still at the base of all the great world religions. It’s remarkable how, no matter which spiritual path you pursue, the nuts and bolts of transformation wind up looking pretty much the same: surrender, detachment, compassion, forgiveness. Whether you’re a Christian, a Buddhist, a Jew, or a sannyasin, you will still go through the same eye of the needle to get to where your true heart lies” (xvii-xviii).

Cynthia puts it together quite clearly so that the reader is not left wondering why s/he needs to meditate or work with the sacred scriptures (called lectio divina), or chant or do some form of labor that is rhythmic. It is all there, and if you have read Thich Nhat Hanh you will find the same basic tools set forth in Zen Buddhism. Working the three centers assists in surrender, detachment, compassion and forgiveness.

Ultimately, the search brings you back to your own life. To waking up and realizing you can begin because you already have the basics: a body, a working brain, and a beating heart. You must go back as many times as it takes to get the intention right. For without the right intention you will be left in the end with only a set of tools that you might think are not very useful. It’s only the intention that brings them to life in such a mysterious way of knowing.

Why seek Wisdom?  To awaken. To leave the cave where the shadows on the wall are keeping you distracted and from your true self.