I had wanted to read Kathleen Norris’ book, The Cloister Walk, but it was not in my library.  I kept an eye on the shelf space designated for religious topics hoping that eventually it would appear.  For several months I would walk over to the shelf, read the authors’ last names on the spine of each book and touch with the tip of my finger, Acedia & me. My index finger would curl slightly just in case they got a signal from my brain to pull it toward me. Still there, I would sigh. It did not turn into The Cloister Walk. Why did I think it would? I was not drawn to Acedia & me.  Partly, I’m sure it was that I did not know what “acedia” meant. Partly, the title reminded me of a documentary by Michael Moore. I would console myself by thinking I would eventually do a quick to see if The Cloister Walk was locatable in the network of libraries from which we may borrow. I could order it and have it in a few days, but I put it off repeatedly and replayed the same scene at the library. Whenever my eyes stopped at the only book by Kathleen Norris, and the one I was certain would not interest me, I would get sullen, and wonder what was wrong with my library for having too few books on religion, and not enough books by one author — unless of course you happen to like juvenile fiction; then you will find complete works of any author. 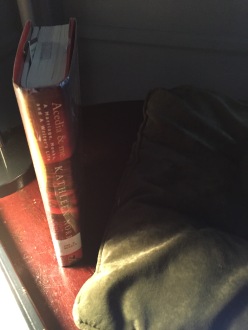 One day I was down and could not figure out why I was feeling as if nothing mattered. I had just finished going over homework with my youngest daughter who had earned some computer time;  I found myself drifting over to the same section I always pick through — again — hoping to find a book I knew would not be there. This time I decided to take Acedia & me off the shelf and see what it had to say. I sat in the magazine section and browsed the table of contents: SOMEWHERE; TEDIUM; FROM EIGHT BAD THOUGHTS TO SEVEN DEADLY SINS; PSYCHE, SOUL, AND MUSE…” I turned the page. Norris, as if knowing she might lose some of her readers if she did not state up front what they were about to read — because acedia is not a word that circulates widely in our language — wrote a little author’s note to tell us how tangled acedia is with everyday life, and just how she was going to work out a few tangles by thinking on

“the much-maligned doctrine of sin; the question of whether acedia may be equated with depression; the implications of believing that human beings are made in the image of God; the psychological insights to be found in monastic literature and practice; and the meaning of marriage and motherhood.”

All those words made me pause. Depression. You mean there could be something else out there besides depression that is making me feel so listless?

Similar to Kathleen Norris, I wondered if I suffered from depression and did not know it.  But, when I compared myself to what I had read about depression I could not relate to many of the symptoms. The feeling I had was not intense enough to require medication, and I never got to any point of hopelessness. I did counseling, at the suggestion of a friend, for some time, and while it helped address very particular problems I was having; it fell flat for me spiritually. This too, is where Norris’ book became a refuge for me. For in Acedia & me she elucidates how prayer, the repetition of it — not just asking God for things — can be what one needs as a support in life. Yes, the repetition of it all! It is what keeps us in our skin while we are facing a crisis or just the dullness of another day.  I had also wanted to understand my condition as more than something for which I was in need of respite, or a night out with my husband.  I was not looking for someone to tell me that I had sinned a great deal or that suffering was my cross so learn to love it; I was not eager to wear a hair shirt, but neither was I looking for someone to let me off the hook and tell me that I deserved a life of absolutely no suffering, period. I needed to understand how an ordinary life could make sense; and how God could be more than just a temporary fix whenever things were not going well for me.

What Kathleen Norris does in this book is not only trace the roots and history of acedia, but she shows how it manifests in the world today. Its ability to devastate is real, and unlike depression, its harmfulness could have greater effects on those around us.  For this reason she seeks the wisdom within the walls of monasteries, and the desert fathers and mothers, who maintain a strict disciplinary practice because their life depends upon it. The emphasis here is on a religious practice; not necessarily faith. She leans heavily on the writing of Evagrius Ponticus (345-399), a monk who eventually became a desert father, to give a foundational meaning of acedia, and then explores through these fourth century writings, the modern implications of acedia.

“Acedia’s genius is to seize us precisely where our hope lies, to tear away at the heart of who we are, and mock that which sustains us” (p.44).

What does it mean “to seize us precisely where our hope lies?” Focusing on the sheer repetition of a monk’s life, and then telling her own story within the pages, for this is also a memoir, she very simply lays it all out: once you begin to lose your ability to care for what you are doing you are in danger, not as a depressed person would be in danger of ending life altogether, because perhaps they lose hope, but you are in danger of walking away, of abandoning yourself, your life’s work, and meaning itself. It seems to me, Acedia is the greater threat to a body and to a society at large. Abandonment. Neglect. Turning away from the world and simply not caring dooms us all.

Acedia begins to look a lot like distraction as Kathleen Norris continues to work with her readings of Evagrius and her own life experiences. In fact, there are times when I thought she had stretched the meaning to the point that I could call anything acedia. But, how acedia distinguishes itself within a world of endless distractions is its ability to empty out meaningful content and leave one blind to what matters. Acedia, it appears, can strike at what we hold most sacred. It takes what is conveyed allegorically and empties it out, and once in that state of emptiness, herein lies the danger: any content may be used as a replacement.  Once acedia takes over it has the potential to destroy completely. It turns our world upside down and fills us with confusion and doubt.

“It is indeed acedia’s world when we have so many choices that we grow indifferent to them even as we hunger for still more novelty. As luxury goods and pornographic images permeate the culture, no longer the province of a select few, we discard real relationships in favor of virtual ones and scarcely notice that being overly concerned with the thread count of cotton sheets and the exotic ingredients of gourmet meals can render us less able to care about those who scrounge for food and have no bed but the streets” (125).

In a world of high speed access: fast cars, fast internet, cameras that can instantaneously send our photos all over the world, etc…, we have come to expect that whatever we do, it will be done fast. To develop a practice that strengthens faith requires discipline and routine that are necessarily slow and steady. This is not to say that technology is the culprit. After all, Norris does call on a fourth century monk to guide her in understanding acedia. The temptation has always been there, but perhaps it is much easier to give in to it, or perhaps, as with all concerns these days, the stakes are much higher if we do allow ourselves to be tempted.  So acedia is not the distraction itself, but rather the replacement of healthy repetition with an unhealthy repetition of novelty.

There is always a danger in worshiping the profane, but believing it to be sacred. Repetition is that which binds us to development. But, it must be a healthy repetition. On the other hand, we can be fooled and lulled into thinking that either our repetition is meaningless and therefore not worth doing, as in, why pray? what’s the use? or we can fall for the common repetition in which we engage everyday that is in itself useless, but is somehow inflated in value, such as looking every ten seconds at your phone to check for messages….

It is, basically, the temptation to do anything other or be anywhere other than where you are:

“I know that when I am tempted to run from an onerous task in the present, I am likely to picture past times that I now imagine to be better than they were, or to project myself into future events of which I can, in fact, know nothing. I am unable to see the grace that is available to me now, in this place and time” (38-39).

Holding steady, then, seems to be our task. A task for which our 21st century technologies have made gravely difficult. When Norris writes, “I am unable to see the grace that is available to me now, in this place and time.” I do not think she is saying that she is ignoring all the good things that are available to her in the present moment — although, she might be doing that too — but, rather, I think, she is attempting a fierce definition of God’s grace, saying that that from which you want to walk away is or cannot be discounted as God’s grace. I am someone who always believed God’s grace would be easily recognizable and come at me like a fluffy pillow. When I thought about grace as a gift I might not recognize as a gift because who would think pain a gift? it made me stop, and retroactively pick out all the grace I have received that I categorized as either a long or short parenthesis of pain in my life.

“No one is exempt from anger, jealousy, greed, gluttony, lust, pride, acedia. Our job is not to deny them or run from them, but to make our way through to the virtue on the other side” (138).