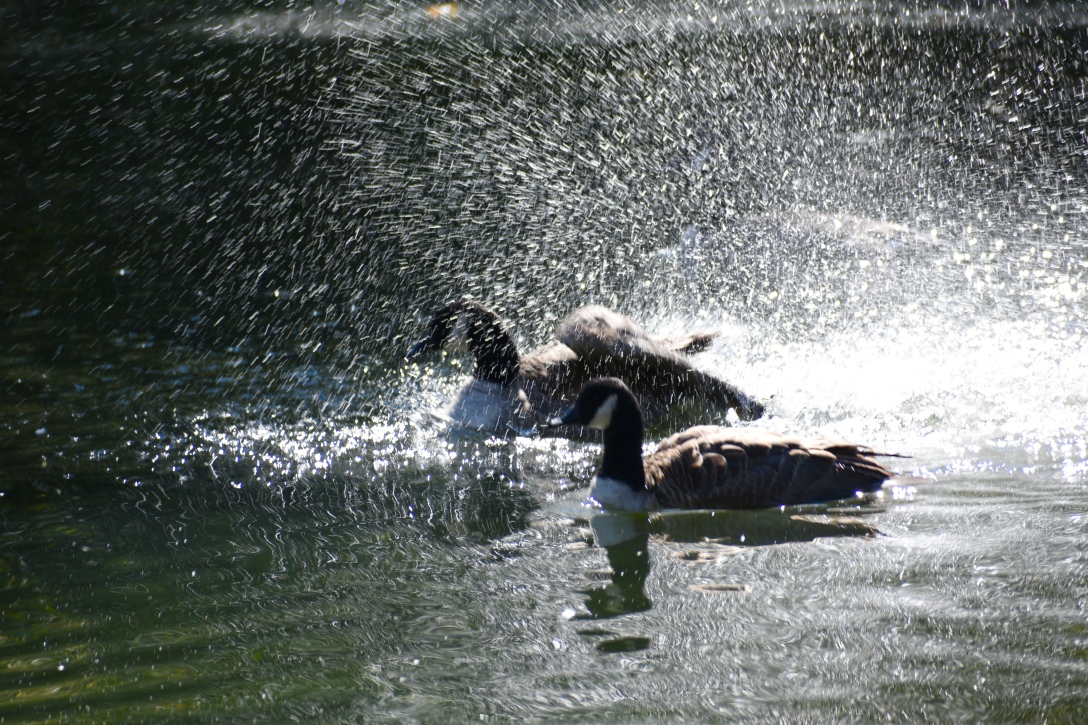 A Sand County Almanac was published in 1948. It took Aldo Leopold ten years to write, which says something about his particular care for such things. In part it is written out of his experience living along the Wisconsin River in what was referred to as The Shack, by the Leopold family. Leopold purchased land that was overworked and virtually useless to use as a getaway.  It eventually became a place to pay attention to the land and begin to feel its pulse (Today it is an education center and part of The Aldo Leopold Foundation). In a larger sense, though, A Sand County Almanac reflects a lifetime of careful observation and much self-reflection. Each sentence reveals a love for all things living. A Sand County Almanac is both a series of wisdom reflections on living in the company of all things, and a call to change how we relate to the land.

While there is a gentleness in Leopold’s prose there is also a profound sadness and frustration and even harshness. At times Aldo Leopold is a man reckoning with the arrogance and ignorance he possessed in his youth; and then there is subtle exasperation at the continued collective arrogance and ignorance the world possesses.  A Sand County Almanac is the story of a slow conversion to the wonders of the land and all its inhabitants.

It is an admonition of man and praise for the wild.

Aldo Leopold stands out because he is not afraid to look deep into the eyes of the “other”, even when the “other” is a she wolf. When Leopold tells the story of he and his friends shooting at a mama wolf and her grown cubs, because when a hunter spied a wolf the only response was to shoot it, you can feel the anguish of the fleeting connection Leopold makes as he watches “the fire dying in her eyes.” And at the high point of excitement comes regret and then if you are lucky, learning:

“We reached the old wolf in time to watch a fierce green fire dying in her eyes. I realized then, and have known ever since, that there was something new to me in those eyes — something known only to her and to the mountain. I was young then, and full of trigger itch; I thought that because fewer wolves meant more deer, that no wolves would mean hunter’s paradise. But after seeing the green fire die, I sensed that neither the wolf nor the mountain agreed with such a view” pg. 130.

Upon further reflection he elaborates on his youthful ignorance to give the reader a precise understanding of the negative effects to wilderness wrought by the hands of man:

If killing off the wolf to maximize deer hunting, only to have to manage the deer population that is killing the mountain, is not a good enough example Aldo Leopold offers many more. The reader is reminded over and over again by Leopold that man cannot manage land or animal populations well when he or she only takes human desire to maximize profit into account.

“Each August when the haymakers came to pitch their camps, singing and drinking and lashing their teams with whip and tongue, the cranes whinnied to their colts and retreated to the far fastnesses. ‘Red shitepokes’ the haymakers called them, from the rust hue which at that season often stains the battleship-gray of crane plumage. After the hay was stacked and the marsh again their own, the cranes returned, to call down out of October skies the migrant flocks from Canada. Together they wheeled over the new cut stubbles and raided the corn until frosts gave the signal for the winter exodus.” pg. 99.

But, there is always someone who thinks more is better:

“The new overlords did not understand this. They did not include soil, plants or birds in their ideas of mutuality. The dividends of such a balanced economy were too modest. They envisaged farms not only around, but in the marsh.” pg. 99

Clearly, Leopold, in his steady prose, is infuriated. He points out the absurdity of wanting everything even the marsh itself.

In his subtle voice he is calling for a deeper connection to the land than merely eyeing it for profit. Simply selling off parcels to accommodate a man’s lust for money exhausts all involved. At the time, no doubt, draining the marsh and filling it in to create farms must have seemed like a brilliant idea. What’s a few cranes anyway? And who cares about a marsh? Unfortunately, throughout the years it has always been what’s a few ______ (fill in the blank) anyway as populations of cranes and other wildlife diminish and disappear, and land is rendered useless by development motivated solely by self-interest.

Leopold’s mild-mannered book advocates a different way of living on the land by showing with one story after another how disregard for wild spaces will eventually lead to total degradation of the land and further extinction. His stories are more than statistics they are motivated by his relationship to the land and the animals populating it, which arose through much patience and intense listening. He relates his early visits, 4 a.m. to the marsh:

“To arrive too early in the marsh is an adventure in pure listening; the ear roams at will among the noises of the night, without let or hindrance from hand or eye.” p. 61

Perhaps the saddest story is his recollection of the Flambeau woods where the Conservation Department was on the verge of creating a wild space for young Wisconsiners, but then came the demand by farmers for cheaper energy and in the end the farmers gained access to the wild to meet their needs.

“Almost equally serious as an obstacle to a land ethic is the attitude of the farmer for whom the land is still an adversary, or a task master that keeps him in slavery.” P 224.

Leopold does not spare anyone when it comes to misuse and abuse of land. It is not only the farmer, or the businessman or the hunter who threatens the wild, it is also the recreation industry proliferating the many gadgets that make life easier and the wild more accessible — which is definitely an oxymoron, accessible wilderness. NO!

“A gadget industry pads the bumps against nature-in-the-raw; woodcraft becomes the art of using gadgets. And now, to cap the pyramid of banalities, the trailer.” P166

If Aldo Leopold had lived longer he would have witnessed the super banality of Disneyland and DisneyWorld where the entire globe became accessible in miniature and one could have an adventure in comfort without risking anything but one’s bank account.

If anything Aldo Leopold is inviting us to think about more than ourselves. He is asking us to think deeply about the “biota” — the animal and plant life, before we agree to a luxury hotel, an oil refinery or a theme park.  Think before destroying life.  Is that too much to ask of us?

How banal we have become! Oh Wisconsin! On a drive out to Minnesota from New York after 10 years of being away, my husband and I were surprised at the many water theme parks in Wisconsin. How does this even make sense? Wisconsin needs water theme parks to have outdoor fun?

The rivers sing for Aldo Leopold much like we find them in the psalms. The land is alive with human characteristics. But these wonderful human traits are not heard by those who want to ransack the wilderness as if dominion over it could only mean profit from it.

There is no future in the economy of destruction.

“Perhaps our grandsons, having never seen a wild river, will never miss the chance to set a canoe in singing water.” p.116

Leopold is warning us with this “perhaps”. He knows it is dangerous to take up a position where we do not miss what we never had. Perhaps our grandchildren will not miss clean air, potable water and good soil too. We know the answer to this. We are not talking about a turn-table here or vinyl records, but rather what keeps us alive and human. We will miss it and disappear with everything else. No exceptions. Why should there be?

The challenge is preservation of the natural spaces, the wild. But, he recognizes himself as an intruder, even if he only goes to the edge to listen.

“Thus always does history, whether of marsh or market place, end in paradox. The ultimate value in these marshes is wildness, and the crane is wildness incarnate. But all conservation of wildness is self-defeating, for to cherish we must see and fondle, and when enough have seen and fondled, there is no wilderness left to cherish.” p. 101

I had been meaning to get back to Aldo Leopold’s, A Sand County Almanac. And I am glad I did. I began reading it in my mid-twenties. It was the book I took on the bus while traveling from New Jersey to New York City. There was something in it then that I loved, but was too busy being distracted by the world instead of awed by it to listen to Aldo Leopold’s gentle voice. I put the book down mid-way through it and let myself engage in all sorts of superficiality. I never forgot about Aldo Leopold, though.

It was not until I had children that I began to look at the world around me. From a leaf’s tiny veins to wild mushrooms sprouting in the backyard after much rain. I began to become aware that something was going on in the world besides my life. The library dealt the biggest blow to me when every book I took out for my youngest daughter on wildcats concluded with extinction or near extinction. Everything my youngest daughter thought was precious: wildcats, whales, dolphins, penguins, ice and snow, was ending. Thirty years have gone by since I first read Aldo Leopold. As a twenty-something I would have scoffed at a marsh; as a fifty-something my heart breaks whenever I must tell my daughter that the rivers no longer sing.

Yes, they will miss what they never had.